Running a half-marathon on the Great Wall of China was one of the moments in life when Captain Jamie Davis of the United States Air Force reflected on how far she'd come since graduating from Hoover High School in Fresno, California in 2003.

As Davis makes clear, one of the defining moments in her life was receiving the Imani Scholarship from McCaffrey Homes – a leading, third-generation local family homebuilder based in Fresno.

"I feel like that was my turning point in life," Davis said, "to be able to move to the next opportunity. Karen and Bob McCaffrey, and the folks at McCaffrey Homes, afforded me an opportunity that maybe not a lot of people always get – and for that I am truly grateful."

A talented high school student and athlete, Davis used the Imani Scholarship to attend a year of prep school. She was then admitted to the United States Air Force Academy in Colorado Springs, Colorado – one of the nation's most demanding universities and a place where leaders are forged.

Recently, Davis returned to Fresno to see family and friends. She also visited with Karen McCaffrey of McCaffrey Homes to share her story. 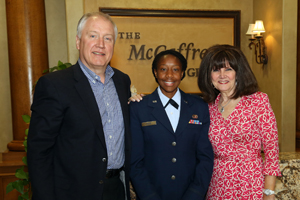 "I was a biology major," Davis said, "but like everyone at the Air Force Academy, I took a ton of engineering courses. My studies using the Imani Scholarship helped further prepare me for the level of academics at the Academy."

Upon graduation, Davis received her commission as an officer in the Air Force. She has served on active duty around the world for nearly eight years since.

"My first assignment was in Colorado," Davis said. "After that, I was in Japan for about three years. I was also deployed in the Middle East. My specialty is contracting. In the military, we also call it procurement. In the private sector, it's called purchasing."

Building on her success, and following her promotion to captain in 2012, Davis has continued her education. She is currently pursuing an MBA at The Naval Post Graduate School in Monterey, California with an emphasis in strategic purchasing.

"My husband and I met in college," said Karen McCaffrey. "The lessons Bob and I learned there – and from our years building homes and serving our community – have shown us again and again the value of education and the importance of investing in people and our future."

"We feel fortunate to have been able to assist Jamie and the other Imani recipients with such a well-deserved scholarship," McCaffrey added. "It's very important to our family and team to give back to our community and we've also gained so much from meeting her. Captain Davis is truly an inspiration to all of us of McCaffrey Homes."

When asked to describe the impact that earning the Imani Scholarship had on her life and career, Davis shared details of the event and the scholarship. "Simply going to an event like that was very elegant" Davis said of the award ceremony.

"And then, meeting the McCaffrey's was key," she continued. "They are really outgoing and dynamic people, motivational and inspiring too," Davis added. "To meet them – and for them to consider me as someone they wanted to offer a scholarship to –was very humbling."

"It really changed a lot of things for me, "Davis said. "My perspective changed. When I look back at that scholarship, it's one of the few moments I remember as a turning point in my life and in my education."

When asked what advice she would share with high school students today, Davis answered, "I would tell them to chase after opportunities, never give up, and to find something that motivates them."

"You just never know where life is going to take you," Davis added. "Sometimes there's a different way to get there or a better path for you to go. I would also share with them a little about me and who I am, and let them know it's possible for them to accomplish things in life they might never think could happen."

From Hoover High School in Fresno to the Air Force Academy, and from the Great Wall of China to The Naval Post Graduate School – Captain Jamie Davis' remarkable story and her life are compelling examples of success.

Return To News
Blog Facebook Instagram Twitter Pinterest YouTube LinkedIn
© Copyright 2022 McCaffrey Homes - 7020 N. Van Ness Blvd. Fresno, CA 93711 · P: (559) 256-7000 · F: (559) 256-7010
McCaffrey Homes Realty Inc., CA BRE License #01222049. All information subject to change. All imagery is representational and does not depict specific building, views or future architectural, community or amenity details. All services, pricing, square footage and bed/bath counts subject to change. Persons do not reflect racial preferences. Not an offer or solicitation to sell real property. Offers to sell real property may only be made and accepted at the sales center for individual McCaffrey Homes communities. Promotional offers are typically limited to specific homes and communities and are subject to terms and conditions. For additional legal disclaimers please read our Privacy Policy or Terms of Use.