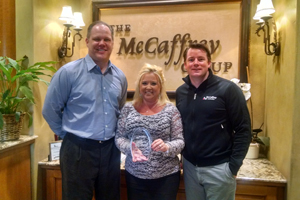 Janel Showers was recently honored for ten years of service with McCaffrey Homes. She now serves the company in a dual role: service manager and executive assistant.

Also honored for their service were Sheryl O'Neal and Tina Akin, both community representatives celebrating their five-year anniversary with McCaffrey Homes.

Reflecting on her time with McCaffrey Homes, Showers looked back on the many homeowners and co-workers she has helped — and the lessons she has learned.

Asked if there was a project that most stood out in her first decade with McCaffrey Homes, Showers said, "We make every new community unique, but Braden Court in Clovis will always stand out in my mind," she added. "One of the new home plans was named after my son, Austin."

The community itself was named after Braden McCaffrey, son of company president Brent McCaffrey.

"Every new home we built in Braden Court was named after a team member's child or grandchild," Showers said. "Like each of our new homes and communities, it resonated family," she added.

"At McCaffrey Homes, we attribute our success to a deep focus on the customer and to a culture of service that has been fully embraced and implemented by our entire team," Showers said.

Showers has worked closely with Eliant, a firm that measures customer satisfaction for leading homebuilders across the nation. That experience has only reinforced Showers' long-held beliefs.

"Working with Eliant and attending their conventions has definitely helped us in creating a successful 'Path to Homeownership & Beyond,'" said Showers. "We truly listen to our homeowners and make appropriate adjustments based on their comments, as our goal is for each homebuyer to have a stress-free and positive experience during the building process. It's important that each homeowner feel confident and know McCaffrey Homes will be here for them long after we turn over the keys to their new home."

When not helping homebuyers and the team at McCaffrey Homes, Showers enjoys spending time with her husband, Troy, and two sons, Austin and Zachary. She attends country music concerts and Fresno State football and softball games and spends time with friends at the lake or beach.

As she looks ahead to the future, Showers said, "To be successful, you must surround yourself with the right team. Not only do we have the best team at McCaffrey Homes, we have an extended family."

Like Showers, the team at McCaffrey Homes is dedicated to building homes that last a lifetime, while meeting the needs of homebuyers at every stage of life. For McCaffrey Homes, this resonates with the company's message: Built for a lifetime means more than quality homes built to last. It's about a tradition of pride, craftsmanship, and the idea of "home."