The McCaffrey Homes team is proud to join the salute of all those who so honorably served our country during the Vietnam War. In fact, we’d like to invite all of our neighbors, their families and all central valley residents to pay tribute to the brave men and women who served in the War by taking part in this historic event.

Proudly displaying the names of all those who served and died in the war, The Moving Wall is a scale replica of the landmark memorial in Washington D.C. that has been attracting visitors from across the nation for more than 30 years.

“The men and women who made the supreme sacrifice in Vietnam must never be forgotten and will remain in our hearts as comrades forever,” said Madera County Supervisor Rick Farinelli. “The War touched all of us in some way, whether we served or not, bringing the wall here is about never forgetting.”

Farinelli served in the U.S. Navy during the Vietnam War and was instrumental in bringing The Moving Wall to the community.

“For me and the members of VFW Post 1981 who have served our country, the wall holds special meaning because it honors those service members who did not return from protecting our nation and the freedoms we hold dear,” said Norman Alliander, Vice Commander of VFW Post 1981. “This visit reminds us that we will never forget those who made the ultimate sacrifice for our country.”

“The McCaffrey Homes family has deep admiration and gratitude for our veterans. Their brave service is unparalleled and can never be forgotten. We are so proud to take part in this special event,” said Karen McCaffrey, vice president of McCaffrey Homes.

Stop by a McCaffrey Homes Model Center (Ashlan & Locan and Ashlan & DeWolf in Clovis) and receive a free American flag in honor of this momentous occasion. Visitors at the site are encouraged to post their flag, leave a tribute, story, photograph and create their own charcoal rubbings of the names on the wall. Volunteers will be onsite to assist with finding the names of loved ones on the wall.

The Moving Wall will arrive in Madera this Thursday, October 16 via escort by American Legion riders from throughout the Central Valley including Madera, Merced, Fresno, Los Banos and Chowchilla.

The names of local veterans who gave their lives will be read during an official welcoming ceremony that is planned for 11 a.m. on October 18. The event will include remarks from such local dignitaries and Vietnam War veterans including retired Supervisor Vern Moss, County Counsel Doug Nelson and Madera Sheriff John Anderson.

A Sunrise Prayer Service conducted by Pastor Randy Brannon of Grace Community Church and the Madera Ministerial Association will follow at 7 a.m. on Sunday, October 19.

Visitors are welcome at the wall twenty-four hours a day. 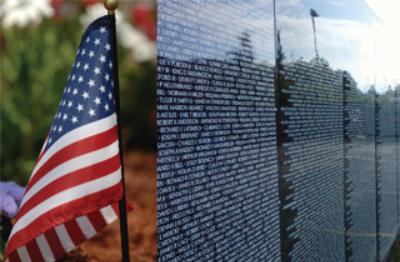