Home > Blog > The Story of the Flag Barn

The Story of the Flag Barn

Like many a great endeavor, it started with an idea – a simple, but compelling vision – that has touched the lives of many.

What's the story behind the building now known – across the nation, and even around the world – as The Flag Barn?

Three generations of the McCaffrey family have built homes and communities that endure in California's central San Joaquin Valley. But the family's roots go deeper, and include forebears who farmed the fertile soil of the fabled valley.

On land long owned by the family sits a barn with a red-white-and-blue paint scheme. It's a simple building with a big story. It's also a place that has earned local and international attention for 15 years.

The barn with a flag sits at the corner of SR 41, the road to Yosemite National Park, and Avenue 12.

People have traveled from across the country, and around the world, to visit and take a photo. Major League Baseball filmed there. Military veterans journey for miles just to see it. A busload of tourists from Italy visited to pay their respects.

The story of The Flag Barn starts with Robert and Karen McCaffrey – founders of McCaffrey Homes, a leading local family homebuilder based in Fresno.

Both have a deep reverence for the land, and each has a commitment going back decades to the Fresno and Clovis areas and to the rich land of Madera County.

After the 9/11 attacks on New York City, Robert McCaffrey made a simple, but powerful, decision: Paint the barn. Paint it red, white and blue with stars and stripes. Send an unmistakable message of support at this crossroads.

The McCaffrey's had no idea then how that simple act of patriotism and unwavering message of support would resonate over the years.

As The Los Angeles Times reported, “It was on a morning in 2001, just days after the 9/11 attacks, that Robert McCaffrey said ‘I've been thinking about it, and I'm going to paint our barn with stars and stripes.'

"It was just our own way to express love of county during a difficult time, but it seems to resonate," Karen McCaffrey said. "It's taken on a life of its own."

To learn more about the Flag Barn, see the complete article from The Los Angeles Times: http://articles.latimes.com/2011/jul/04/local/la-me-adv-flag-barn-20110704

On this Fourth of July, and all year round, all of us at McCaffrey Homes are proud to share The Flag Barn with you. Happy Birthday, America! 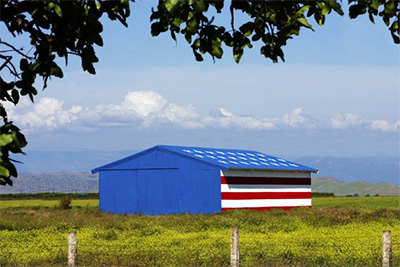 The Flag Barn was painted by Robert McCaffrey of McCaffrey Homes to honor America after the 9/11 attacks. It’s now known around the world.

© Copyright 2022 McCaffrey Homes - 7020 N. Van Ness Blvd. Fresno, CA 93711 · P: (559) 256-7000 · F: (559) 256-7010
McCaffrey Homes Realty Inc., CA BRE License #01222049. All information subject to change. All imagery is representational and does not depict specific building, views or future architectural, community or amenity details. All services, pricing, square footage and bed/bath counts subject to change. Persons do not reflect racial preferences. Not an offer or solicitation to sell real property. Offers to sell real property may only be made and accepted at the sales center for individual McCaffrey Homes communities. Promotional offers are typically limited to specific homes and communities and are subject to terms and conditions. For additional legal disclaimers please read our Privacy Policy or Terms of Use.