When cousins Brent McCaffrey and Ryan De Young were young boys, they would hit the waves together on their boogie boards on family vacations and play hide-and-go-seek at their grandparents’ house.  Today, they both lead two of the most prominent homebuilders in the Central Valley – McCaffrey Homes and De Young Properties.

Brent remembers telling Ryan when they were boys how great it would be if they worked together someday. And today they are.  De Young Properties is the newest homebuilder to join the homebuilding team that includes McCaffrey Homes at Tesoro Viejo, Madera County’s newest award-winning master planned community.

“It’s come full circle, and it feels like coming home,” Brent says.  “We are working together in Madera County where our grandfather, John Bonadelle founded the Bonadelle Ranchos, a property just across the highway from Tesoro Viejo.”

For Ryan, one of the biggest bonuses of joining the Tesoro Viejo homebuilding team is the ability to work with family.

“On top of it all, we get to work with family,” Ryan says.

Ryan points to the amenities that Tesoro Viejo offers, as well as the ability to live life in a different way as a big draw for De Young Properties to join the homebuilding team.

The connection between Brent and Ryan goes beyond family ties.  They both grew up in the homebuilding business, learning it from the ground up.  They spent summers cleaning up after the building crew and framing houses.

And the mutual respect between the two men is clear.

“He was the Best Man in my wedding,” Brent says, as he talks about fond memories growing up.

Ryan says he looked up to his older cousin and talks with pride about going to USC to watch Brent play football.

Both men knew building homes was in their blood and answered the calling – it’s something they knew they wanted to do and had a deep understanding of after all those young years on the job site.  After college, they both returned to the Central Valley and got to work.  Today, they both serve as president of their homebuilding companies.

Ryan De Young and Brent McCaffrey looking at a photo of their Grandfather. 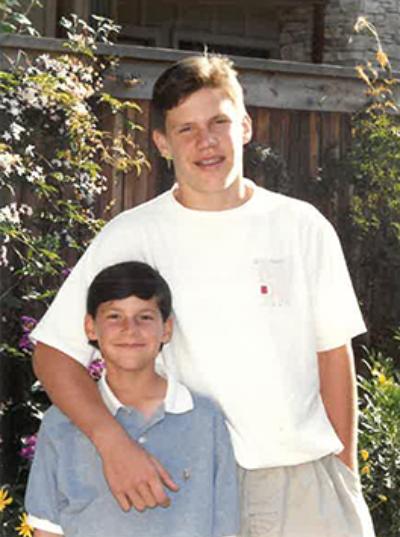