Home > Blog > Are You Ready for Some Football?

Are You Ready for Some Football?

At McCaffrey Homes we operate as a team. We work hard together, but we make sure we take the time to play hard, too! This past weekend our team set out on an adventure where we got to experience the beautiful new Levi's Stadium in Santa Clara, CA -- home to the San Francisco 49ers.

The McCaffrey Homes Team outside Levi's Stadium with (L-R) Jessie, Shelle, Shelly and Courtney. It was great watching two California teams - the Niners and the San Diego Chargers - battle it out on the field.

Pre-game excitement with (L-R) Courtney, Shelle, Shelly, Missi, Courtney and Jessie The Chargers may have led 7-0 in the first quarter, but, the Niners switched up the momentum towards the end of the quarter when back-up quarterback Blaine Gabbert found tight end Vance McDonald in the end-zone for a six-yard touchdown - the first ever touchdown in Levi's Stadium history!

Our group enjoying the roof-top view with (L-R) Jill, Janel, and Jason. Ultimately, the San Francisco 49ers emerged victorious with a 21-7 win over the Bolts.

If you have not been to Levi's Stadium it's a must for football fans. It is a sleek stadium with wide concourses and beautiful, expansive views of the South Bay. The staff is friendly, the jumbo screens are great and the seats are comfy.

We were happy to see solar panels that keep the stadium running efficiently and were especially impressed with the helpful, high-tech app that guided folks around the stadium and allowed fans to order food and have it delivered to any seat in the house.

Our group had a great time spending the day together outside the office. Of course, football is in our DNA. Bob and Brent McCaffrey both played college football at USC and Bob even went on to play for the Green Bay Packers, so we know a thing or two about the game.

Finally, we loved the Niner's never-say-die attitude. We know a thing or two about that, too. Seeing a project through to its completion is a mantra we embrace every day around here. Swing by and visit us on Facebook, Google+, Twitter, LinkedIn, YouTube, Houzz and Pinterest. 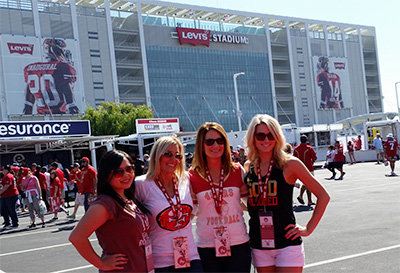 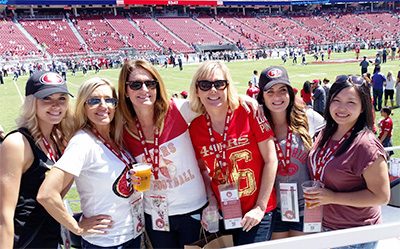 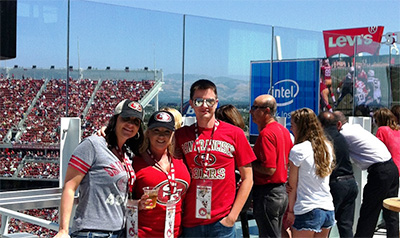 Our group enjoying the roof-top view with (L-R) Jill, Janel, and Jason.